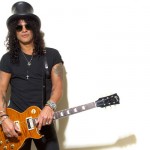 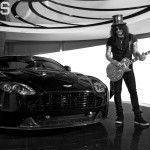 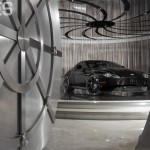 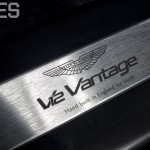 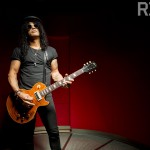 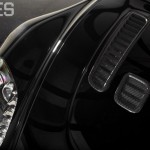 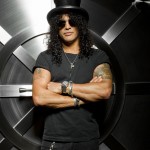 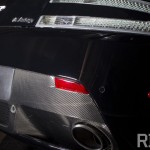 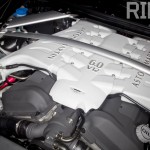 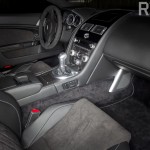 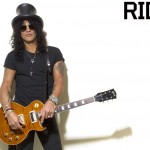 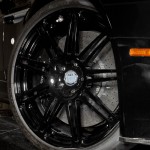 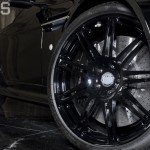 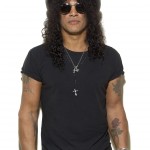 Slash: The word alone invites images of curly black hair, dimmed shades and a signature stovepipe hat concealing the maddening genius of his work. Epic guitar solos and melodic, transcending music are his line of work, through which he has become one of the planet’s most recognizable figures. However, he has a dark side that’s transitioned to his love of cars—though the number of cars he owns has declined over the years. His Aston Martin V12 Vantage is a prime example of the dark arts.

“Hand-built in England for Slash” rests on a custom plaque on each doorsill, making no bones about whose blacked-out beauty this is. Every piece of trim, body panel and even the HRE wheels are sinisterly slathered in black according to Slash’s specs. Once inside, the man uses the space for privacy and as a mobile listening space. As someone who is constantly on the move and consistently collaborating with artists and industry heads, what better way to feel the music than in a British supercar?

RIDES: What fascinates you about cars?

So what was your first toy?

Are you a compulsive buyer?

I went through a lot of cars in the ’90s. I had one of the first-year Vipers when they came out, I had a Porsche, I had a great ’65 Lincoln Continental. I had a Ford chop-top, but I spent all my time on the road. It became an unnecessary expense, basically—just fucking maintaining these cars. I’d be on the road all the time, and I would literally not drive them. I mean, I had a Porsche that I sold not too long ago, and it didn’t even have 1,000 miles on it.

Damn, must be a tease having them sit at home.

I would love to just buy cars, but I know better. I’m not that kind of excessive rock star.

So the Vantage is seriously sinister. Are you trying to scare the neighbors?

I can’t really imagine a car in any—for me, personally—other color. I can’t do red, I can’t do blue, and I definitely, definitely would never be caught dead driving a white car.

If you wanna be badass, black is definitely the right choice.

They [Aston Martin] were only bringing a handful of V12 Vantages to the States, and I wanted one of those really bad when I first heard about them. I had this idea in my head that they were gonna take this big engine and stick it in a small car. And they did it, but they wouldn’t sell them here because there was some sort of crash testing they didn’t want to deal with, and I thought, well, fuck, you know, eventually they’ll come. And I had a DBS at the time, and finally I heard about them coming over here, so I called up my friend at Galpin’s Aston dealership and traded my DBS for it.

I swear to God, as soon as I got the Vanquish, I was getting pulled over all the time for the first year, and after that, it just sort of stopped. I got so many speeding tickets in that car, they almost took my license. But I guess they know who I am now, so they kind of leave me alone.

Wish we had pull like that. So you must drive slow now, huh?

The thing about living in Los Angeles is that it’s hard to drive these cars in the way they are supposed to be driven, so I sneak out on the freeway late at night. I’ve done many drives up to Santa Barbara and back for no real reason. But taking a car past 150 miles per hour is something you can really only do for about five minutes tops. And the whole time you’re at that speed, you’re thinking, Fuck, I’m gonna get pulled over.

Sticking with a stick?

On that particular car [V12 Vantage], it’s the only option. I had the paddles in the Vanquish, but it seems to me the only way to really have a natural feel is with a manual.

Is the Aston one of those cars you can escape in?

Well, I’m one to crank up the stereo, and that one comes with a great stereo system. I listen to mixes in my car. That’s probably the only place I will comfortably listen to mixes.

It’s a confined space, it’s a good stereo and there is privacy. You are just kind of in your own world, and you can really focus on listening to things that you’re working on. If I go home, I can do it in my office, but there is something about doing it while you’re driving that just really does it for me. So I do that a lot.