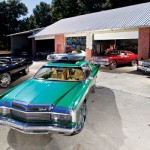 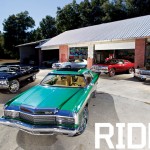 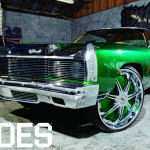 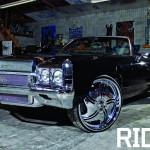 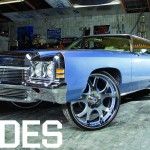 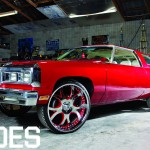 Celebrity whips seldom grace the glossy pages of Donk, Box & Bubble, and even though Zach Randolph is an accomplished NBA All-Star, that wasn’t his golden ticket. Zach’s genuine passion and affinity for old-school Chevys—’71 to ’76 Impalas and Caprices, to be exact—has granted him the right to stake his claim in the Donk game. With the help of Southern custom powerhouse Big Wheels of Ocala, Florida, Zach has earned the official title of NBA Donk King, a spot that’s well deserved and yet to be contested. Not convinced? Peep his fleet.

How’d you get into Donks as opposed to other old-schools? It’s just something about ’em, man. I’ve always seen guys ride Donks in the hood, and I just fell in love with ’em. I got my first one as soon as I got in the league. It was raggedy, but it was all good.

How’d you link up with Big Wheels of Ocala? I got turned on to [owner of Big Wheels] Brian through my former teammate, Darius Miles, when we were in Portland. Brian had done some work for D. Miles, and I was impressed, so I went with him, and he’s been the best ever since. I sent a Donk to another shop in the South and they were horrible—did horrible business, [did the work] halfway, took like three years and all that. Brian was honest and got my shit all the way right.

Explain the steps you go through with Big Wheels to complete your Donk. I pick the color first; we don’t use nothing but that Vibrance paint, that’s one of the most expensive kinds of paint out. I also pick out the rims and the rest of the exterior stuff. Then Brian comes up with the inside and the fiberglass, and it all comes together perfectly.

How many do you own? Do you have a favorite? I have six Donks: three hards and three ’verts. I have another ’74 on the way, too. My favorite is probably the black ’vert; that’s the one I have the most money in. There is a lot of work in that car.

Should we assume you have a lot of bread tied up in all your Donks? Hell yeah! I’m like [Atlanta rapper] Rocko: My old-school cost more than your new-school! I pull up on somebody in a Benz or something that cost them about 70, 80 thousand—that’s what I got in my Chevy!

Do you ever drive any of them around? Yep! I have two of them here in Memphis that I drive. When the weather gets better, I’ll have all of them here. But yeah, I take them to the club and go ridin’ or whatever. I’ve even been to a few car shows with ’em.

You have other rides too, right? I have a lot of toys—the Maybach, the drop-top Phantom. But you can’t put them in the same category as the old-schools. When you build a Chevy, it comes from your own mind; you’re putting yourself into it when you build it. Some people have $100K in ’em, some have $20K; you can tell the difference. Honestly, I’d rather have somebody drive my Phantom or Maybach than my Chevy.

Some athletes get into old-schools for bragging rights. How are you different? I heard LeBron has a Donk that’s pretty clean. But a lot of the players just slap rims on there—that doesn’t count. I take pride in my Chevys; not everybody takes their time and does it the right way. If it’s rusted out, put some metal in there instead of Bondo. Make sure the engine is A1, the paint is good, get a nice li’l trunk setup—have a nicely built Chevy. When I look at one, I look at it inside out. I open the trunk, hood, everything, you know?

Anybody in professional sports seeing your old-school game? Hell nah! I know a couple guys that have Donks, but ain’t nobody seeing me. My boy Jerome James, who lives in Florida, he’s got some nice ones. I’m surprised those football guys don’t have any, though. But yeah, nobody is on my level.

Check out the links below for the details on Zach Randolph’s Donks: