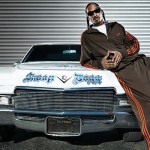 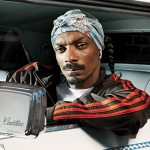 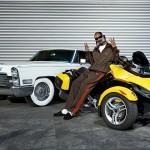 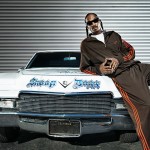 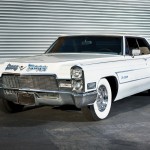 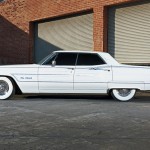 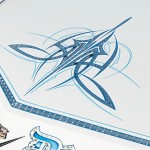 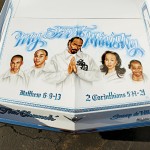 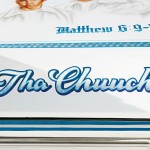 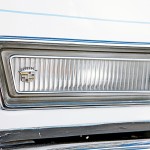 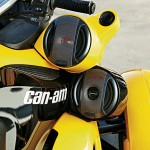 Over a five−year span‚ any given entertainer is likely to reinvent his or her image countless times to remain relevant. From diddling in name changes to murdering out the wardrobe to renouncing trademark rides and rims, it seems, at least in hip-hop, that no aspect of one’s persona is sacred. Then there are those few modern-day Dolemites who need no remixing; the O.G.s who, like Coca-Cola, would be crazy to change up their formulas. They are the Snoop Doggs of the entertainment world.

It’s been five years since the 38-year-old D-O-double-G, born Calvin Broadus, has graced these pages; half a decade gone from the time his chandelier-clad “Brown Sugar” posed for RIDES cameras. Since then, the onetime Rollin’ 20 Crip has risen from the realms of Westside street-bangin’ to become a household name, visage and voice, recognized everywhere from Englewood to East Hampton. Larger than the music that first introduced him to the world, he’s been invited to streak with Will Ferrell, laid down vocals for a TomTom navigation VoiceSkin, and founded a renowned youth football league in Los Angeles’s inner city—all while maintaining the Loc’d-out, braided-up gangsta lean that’s helped albums like his latest, Malice N Wonderland, roll to the top of the charts over and over again. But as is the case with his personal representation, not much has changed in terms of Snoop’s automotive tastes. He’s still a Caddy-daddy, and little has recently caught his eye—except for a Spyder.

Back in 2005 you were a Cadillac man through and through. Looks like that’s still the case. Can you preach to us on “Tha Chuuch?” Yeah, I don’t think I’m-a ever change. “Tha Chuuch,” well, it represents my first ministry. It’s family, it’s God, it’s everything I stand for; you know what I’m saying? It’s about my wife, my kids and just being grateful in a white Cadillac ’68.

For those of us not up on verse, what do the scriptures (Matthew 6:9-13, 2 Corinthians 5:14-21) stand for? The first is the Lord’s Prayer. The other side is a scripture that says not to judge or criticize those you ain’t think are right in the eyes of God, ’cause you never know, they might be God. That gospel will shake you up!

Amen. So in terms of Cali car culture, everybody knows old-school Impalas are king. Where do Cadillacs fall into the picture? Well, the Cadillac forever been one hell of a car to drive, ’cause it’s always been bigger, longer and more fashionable. It was the car of the rich guy. Then the pimp had it; then the gangstas added the flavor by putting Daytons and switches on it. Cadillacs and Chevrolets are basically the best two things out here on the West Coast when it comes to driving or collecting cars. You gotta have at least two apiece. [Any other brands] don’t even stand a chance at all out here.

And obviously the classics are your preference. Are you digging any of the newer models? I ain’t liking nothing that they got out right now. I’m all straight old-schools.

Yet you’re not afraid to modify your cars. Most collectors won’t touch a classic. Lately that’s also the trend with new cars. Do you buy into the whole “grown-man style,” or are dudes today just not original? I mean, you gotta look at it like this: Some people just like shit for what it is. It’s up to you to put your own flavor on it or not. You can get a car with regular wheels and a regular system, but if you ain’t regular, you finna change that, ’cause when you step outta your car, it symbolizes who you are. Like when I first started with Caddys, I had to be wearing the same color [clothes] as the car, so when I jumped out, people was like, “This mothaf**ka, he don’t front!”

All right, well, staying on the subject of later models, everyone remembers your glowing endorsement of the 300C. Is there anything dealer-fresh that’s catching your eye? Nah, I ain’t smashed on no companies or made me calls to get free cars no time soon. I seen the new Corvette and thought it was kind of dope. My son likes it too. I’d maybe call up, say, “I’ll do a little ad for you,” then flip it to my son for his 16th birthday—use my star power, you know. You reading this, GM? [Laughs] You wanna be down with Big Snoop Dogg?

You sure you aren’t forgetting something new? How did you end up with a Can-Am Spyder? One morning I had Good Day L.A. on the TV and seen them displaying one. I was like, “I want one for my birthday. I don’t give a f**k, I’m-a go buy me one right now.” I learned how to drive it in about two, three days. I had never ridden bikes before; I was always against that shit. But I got on this and was like, “F**k that, I’m-a drive this everywhere!” Plus, they had it in the same color as my football team, the Steelers, so it was the perfect pair-up.

Speaking of pairing up, is it ever acceptable to double-dude on a bike? The only time it’s acceptable is if the dude on the back is your biological son. And my sons won’t even be on this. We don’t get down like that, f**k no! Them little ni**as is not holding on to my waist or any of that soft-ass shit.

You said your oldest son is almost of driving age. Will you let him take it? Nah! See, this mothaf**ka went and bought a dirt bike from his homeboy for $200 and is riding it around places we live at with no helmet or jacket! I keep tellin’ this mothaf**ka, “Don’t ride that in here, ni**a!” Now he’s gonna want to take the Spyder, I know. But alone? F**k no!

That’s hard-core fathering right there. Now, how about caring for the environment? L.A.’s got a notorious smog problem. Can we expect to see Snoop Dogg go green? Man, f**k that! It’s been what it’s been, and it’s gon’ be what it’s gon’ be. Can’t blame that shit on no mothaf**kin’ automobiles, you know what I’m sayin’? That’s just a way of them to try to get everybody out of older cars and get them into these space-age, robotic, small-ass bullshit cars. But hey, [laughs] if anybody out there wants to give me one, someone in the fam will use it! I’ll give it to my maid. I’m tired of looking at what she drives. But me, I just can’t get down like that. I’m all about that old-school heavy metal.