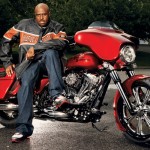 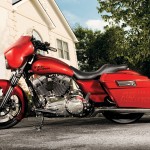 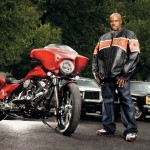 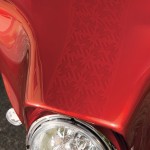 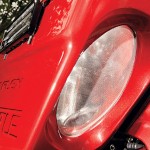 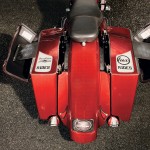 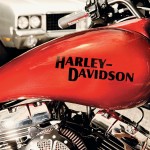 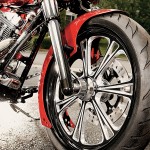 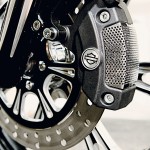 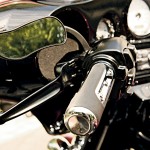 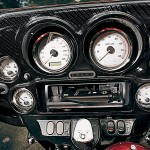 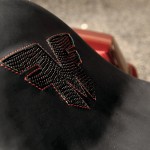 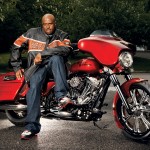 Funkmaster Flex is a living dichotomy: Over the airwaves of New York City’s Hot 97 FM, the hip-hop heavyweight DJ has made a name for himself through high-energy sets of old- and new-school tracks, mixed seamlessly under loud, in-your-face, but always entertaining vocals. Then there’s Flex the gearhead. Highly regarded in his passion for car customization and restoration, the big-block-biased proponent of American muscle has “reinvented the wheel” numerous times over, for both himself and his growing clientele. But Flex’s shop talk diverges from his radio persona; his builds differ vastly from the radio and club performances. In a calm, calculated delivery, he’ll tell you his design aesthetic is simply “clean and mean.” Now with countless restores and tastefully tuned classics under his belt, Flex—whose latest auto-centric television show, Full Throttle, drops bombs on MTV2—decided to try his hand at another new task: designing a customized Harley-Davidson motorcycle. With the help of RIDES’ go-to bike builder, Doug Keim, the big-dog pit bull lined up to call a subtlety styled audible on an already proven play. “Flex may be over-the-top on air,” explains Keim, owner of New Jersey’s Creative Cycles, “but when it comes to styling, he’s all about being understated and accentuating the lines that are already there, not creating new ones.” The duo, who decided to mix in a bit of the DJ alter ego, chose the brand’s Street Glide for its classic big-bodied styling and ability to swallow up a healthy dose of Sony Xplod audio equipment. “Flex is still a DJ first,” states Keim. “So even with this bike being an exercise in good taste, there’s no way we weren’t going to make it loud.” A few meetings later, including time spent with Harley’s extensive parts catalog, the two had done it. Clean out your ears and open up your eyes—or let the FMF Street Glide do it for you.

Design Within Reach
I’m a huge car guy. I love classic, American muscle—and new muscle, as well. My favorites are the Mustang, the Camaro and the Challengers. New and old, I got ’em all. But the reason I love classic cars is the time it takes to put them together. I’ll take three to four years on one, and I try to keep them in the $20K to $40K range. The reason for that is because a lot of today’s music videos make, like, a little too grand in my opinion. I don’t think Porsches and Lamborghinis are attainable for most people. I want to show them something they could realistically do. Now, what I like about Harleys is, first off, they’re American-made. Second, they have a great web site where you can go see everything they make and decide what suits you best. For me it was the Street Glide, given its height, weight and general look. I saw it in its normal form and, just like a car, you think, How would that look customized? I got this picture in my head, and just like the cars I’m into, it had that American muscle, strength, beast form to it—which is what I’m into.

Easy Does It
When talking specifics, my mind immediately went to color. The first thing I told Doug was that my favorite color is red—candy, preferably. My favorite car is my ’70 Chevelle, which is red with black stripes, so in doing a bike I wanted to echo that. The 16-inch front wheel that came on it was nice and all, but in this game, bigger does get you attention. I didn’t want to go crazy, but a 21-inch seemed right, and Doug devised a great braking system that uses only one rotor but a larger caliper—that way you see more of the wheel’s beauty. I appreciate craftsmanship, and whether you’re talking cars or bikes, the hardest thing to do is to not do too much. You could map out a build with all sorts of crazy features, but when you’re putting it all together, you have to know when to step back and say, “Wait, that’s too much.” That’s what I love most about this bike. It’s not too much. My logo’s on it but it’s ghosted. The seat is eye-catching but in a simple way. And the “Harley-Davidson” painted on the gas tank? See, most people would have outlined that in silver or something to make it stand out, when you don’t need to take it that far. You really just have to know when enough is enough.

Team Building
When you’re a builder yourself, working with another builder is hard. You try not to even envision what the finished product is going to be, because if you do, it’s easy to get disappointed. It’s almost like you have to be a piece of clay and let them kind of mold you into their way of doing things. It doesn’t always work, but anytime you’re able to bond with someone on a level where they see your ideas just like you do, then you know you have a good thing going. Doug and I had that connection on this project, and he also appreciates that “not too much” mentality. When you’re able to do that, you get a finished product that flows. Nothing is glaring; the wheels complement the paint, which complements the chrome, which works with the seat and so on. But don’t get me wrong—I’m still going to stop traffic!

Line of Sight
There’s nothing better than having something that’s custom. This bike is definitely custom, but it’s still a Harley all the way—hurtin’ ’em! That’s a big part of my design philosophy: You don’t want to lose sight of your original product. You follow the lines that are already there, and you enhance them; you don’t ever want to lose them. I don’t want to look at something and not know what it is. That doesn’t necessarily mean something is a bad customization, but it’s clear when you’re not on the same page as the original designer.

Brand-New
At one time I felt like the Harley-Davidson brand wasn’t affordable to me, and even then I thought of them as just touring bikes. But in the past five years, I’ve started to see them as “young.” They’ve taken a brand that has traditionally had so much credibility with the 40-and-over crowd and made it attractive to 40-and-under. And I think the best thing about them is that they’ve been able to put new eyes on the product, because the product was never broken. They got me to look, and I like it. I don’t put my name on nothing that I don’t like! On top of all that, when you buy a new motorcycle from them, you get a catalog that’s about as thick as a phone book, full of things you can buy or add to it. To put it simply, it’s a hands-on product that’s meant to be touched.