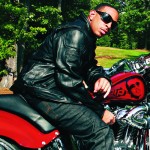 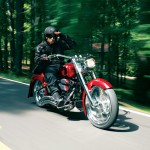 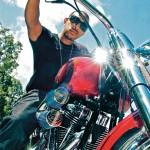 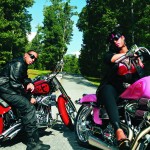 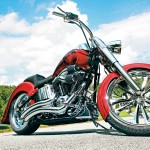 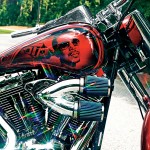 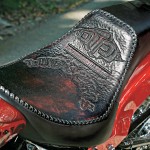 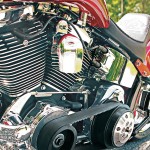 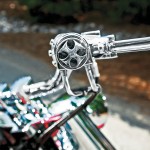 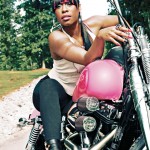 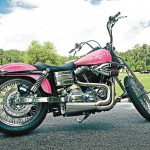 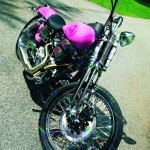 Way back in 2007, American motorcycle giant Harley-Davidson collabo’d with Ludacris and his Disturbing Tha Peace crew to do a little something for the kids. Together, the Milwaukee motorcycle masters and the Ludacris Foundation hosted parties and even auctioned off a Harley-Davidson Fat Boy to help raise money for underprivileged kids. A good deed indeed, but in the midst of his charity work, something rubbed off on ol’ Luda: a craving for a Harley of his own. Fast-forward two years, toss RIDES into the mix and what do you get? An all-out custom Fat Boy, cooked up as comfort food to satisfy Luda’s fixin’. But everyone knows riding on chrome is even better with a partner, so instead of stopping at one, RIDES also built DTP’s top lady, Shawnna, a modded hog of her very own—in a ladylike pink hue, of course.

After being tapped for the task, a Fat Boy and Street Bob for Luda and Shawnna, respectively, were sent to NYC Choppers, where shop owner “New York Nick” Genender worked alongside Luda and RIDES to whip up these two one-of-a-kind motorcycles. “What we try to do is garner input and take what they represent and build the bike around them,” explains Nick. “For Luda’s bike, we used a deep rich color, and we went with a pro street look, to give it the appearance of being lower to the ground like a drag bike.” In addition to changing up the geometry, everything able to be dipped was chromed and the custom tank and fenders were sent to airbrush extraordinaire Cory Saint Clair. To accomplish a more retro-inspired look, Shawnna’s bike sports a Harley-Davidson springer fork, wire wheels and a ton of shiny bits. And not to be rebellious without cause, her bike is also a rolling tribute for the fight against breast cancer. Bring the noise.

We know you’re a big car head, especially when it comes to Cadillacs, but how did you get into riding bikes? Man, it’s just a lifestyle, you know. I’ve had uncles and different family members who used to ride motorcycles; I was always intrigued by them. And, you know, I did the movie 2 Fast 2 Furious. I’ve always loved cars and I’ve always loved motorcycles.

How’d you learn to ride? I have 22 acres of land and a few four-wheelers, so I learned the gearshifts with those, and from there I upgraded to motorcycles. This will be my third one.

But this is your first Harley, right? Yeah, I have two sport bikes. What I love about the Harley is that it’s more laid-back. You’re not going as fast, kinda just cruising and relieving stress. It’s about sitting back and just…stuntin’. Harley is one of those brands that gets passed down from generation to generation, and they’ve been around so long, they have a good long-standing product. So, you know, I feel like I’m privileged to be a Harley owner right about now.

What was your inspiration when it came to designing this Fat Boy with bike builder New York Nick? The process of putting a bike together is about taking two creative minds and merging them. We talked about it over the phone, drew up some sketches, I told Nick my favorite colors were red and black—Atlanta Falcons colors—and how I wanted certain things chromed. You want it to look different from anybody else’s bike, and now I’m seeing the final product, and I couldn’t be happier.

If you had to pick, what’s your favorite thing on your new Harley-Davidson Fat Boy? Of course the murals Cory Saint Clair put on the bike, whether it’s Disturbing Tha Peace, the Battle of the Sexes logo, or my face on the tank. And then, of course, the chrome; all the chrome everywhere always accents a bike.

Aside from being the title of your new album, what is the Battle of the Sexes all about? You know we’re all really competitive, so in customizing this bike, in going fast, in living life…in the fast lane, all of these different things, it goes into Battle of the Sexes.

Word, so whatcha think of Shawnna’s bike? I think it’s hot. It’s pink; it’s fit for a lady. But it’s not better than mine! [Laughs]

So Luda sort of surprised you with this Street Bob, huh? Yeah, Ludacris actually called me and said, “Hey, we’re going to do a Harley photo shoot.” I said, “I love Harleys, book my flight and I’ll be there.” But he called me back later and was like, “Yo, I got something to tell you: RIDES is going to build you a bike.” I think I dropped the phone. I started screaming to my friends, telling them what was up.

Once you got on board with the project, you opted to do a theme to support women with breast cancer. What was the motivation behind that? Well, my mother is a cancer survivor—not breast cancer—but I think that that demon comes in all shapes and forms. I’m a big supporter of the Susan G. Komen Breast Cancer Foundation, and to be able to ride a Harley that represents the struggle that women have with breast cancer just does something for me. It says a lot about what I’m trying to do for the movement.

And does a Harley work well with that message? Harley-Davidson as a brand means empowerment. When you get on one of these and you hit the open road, you feel free, you feel the wind and its strength. That’s why I think more women need to become involved in riding.

What do you think about how your Harley turned out? I love it. It’s pink, it’s chromed out, it’s Harley for one. That’s it. All it has to say is Harley-Davidson for me, but to be custom made for Shawnna…I mean, all I can say is, I love it. RIDES couldn’t have done any better for me.

So it fits you? Very well. I’m a very petite, small woman, and I’ve had a chance to ride some Harleys before; they can be very intimidating. So this one, being just right for me, I think I’ll have a very good transition into being able to ride with the boys. You know, I ain’t even gonna beat around the bush, Harley’s top of the line. If you’ve got one of these, you know your stuff.

Now you just need to get your license, right? My motorcycle license is in the process of being expedited. I think I’m gonna do well. I think you gonna have to come back to see this monster RIDES has created.