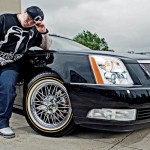 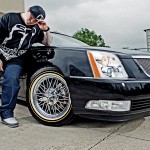 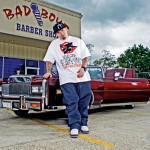 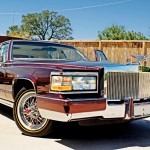 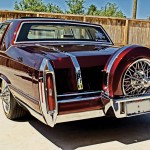 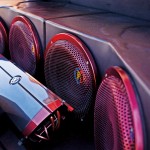 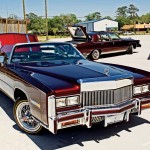 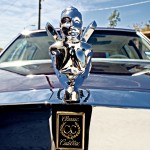 It’s been a minute since Paul Wall, the self-proclaimed “People’s Champ” of rap stepped into the ring. Born Paul Slayton, the 28-year-old hustler extraordinaire was one of the first to introduce Houston’s unique car culture and swagger to mainstream hip-hop. Years after “Sittin’ Sidewayz” first hit airwaves, not much has changed in the land of Vogues and pop-trunks. Paul, however, has come a long way. Now married with a son and daughter, the entrepreneurial-minded rhymer is partner of clothing line Expensive Taste, with friend and colleague Travis Barker. His grill and jewelry business has moved locations into H-Town’s upscale Galleria mall. And on top of it all, he’s about ready to drop another album, appropriately titled Fast Life. Yet, with just about everything in Paul’s world changing and evolving, there is one constant—his love of cars. Cadillacs, to be specific. You may have caught some foreign influence in his fleet before, but those days have passed. Today’s Paul Wall only messes with domestics.

So there’s no question you have quite the appreciation for Cadillacs. How’d they become your car of choice? Well I was always into the old-school Cadillacs growing up—seeing them fixed up all nice. Then I got into the new ones too. It’s the luxury of it. When you ride in one it’s like riding on a cloud. There’s just a big difference from being in a Cadillac over a normal car.

You have a few “clouds” to choose from. Which one is your favorite? You know I have different ones for different reasons. Like, my favorite old-school gotta be that ’76 convertible. Then the more recent one I got is my favorite new-school one ’cause driving in it is just so comfortable.

Now that you’re a husband and a father, have you had to give up any favorites? Or have either of those life developments altered your car game? When my little boy was born, we made a candy painted car seat for him. Homeboy that paints my cars did it up to match the car too. Other than that, not really. You know, [Cadillacs] are large cars and pretty safe. Even if you get into a wreck, there usually ain’t too much damage to them big ol’ mobiles.

But the wifey hasn’t said anything like, “You need to go out and buy a minivan”? Nah, nah. Nothing like that. She rides in our Escalade, so I think we’re good. We don’t need to change nothing around.

That’s refreshing to hear. OK, so it’s no secret that your friend and business partner Travis Barker is another huge Cadillac fan. Between the two of you, who’s reppin’ the brand harder? [Laughs] I think him. He’s got Cadillac tattoos and owns like 30 of them, you know what I’m sayin’? I just got me a couple. I got these three, the Escalade, then two more I’m building up. But he got me beat.

No Caddy ink for you? Not yet. I thought about it, though. But it’s been a minute since I got me some tattoos. Probably the next time I go in I’ll get something along them lines.

And you said you have two more cars on the way? Yeah, two more that I’m in the process of fixing up. A ’77 hard-top and a ’71 convertible. Both of those are in the works right now and couldn’t make it out for this. One’s at the mechanic and the other’s at the paint shop. They’re coming soon.

Is there anything new you got your eye on? Like dealer-fresh? Nah. I know the new Escalade models are coming out sometime soon. So I’m waiting to see those and maybe get one. I done had other cars too. I had Benzes and a Bentley. But I got rid of all of them. For me, there’s just something about a Cadillac.

Does the current state of the American auto industry have you nervous for their future? Not really. I know they gonna find a way to get out of it before they go all the way bankrupt. I know they got the hybrid Escalade now, so I guess they’re making ways to adjust for what the people want. Personally, being so big, I just can’t imagine Cadillac being no more.

What’s your take on Obama getting in and firing CEOs and things like that? I don’t know. It’s hard for me to say, ’cause I really don’t have the first idea about how to run a country, know what I’m saying? I can’t be mad at him for that. He’s definitely doing something different, and I think that’s what we need right now.

Back to tattoos, did we hear right that you’re planning to get the commander in chief’s face on your neck? Yeah, I had talked about that a while ago, but my girl said she ain’t gonna give me none if I go and get Obama on my neck. Not because it’s Obama. Because she doesn’t want me having tattoos on my neck. I think I’m just going to wait. Let’s see what he does with this economy first.

Good plan. On to the new album, your lyrics have always been steeped in Houston’s unique car culture. Can we expect more of that? And has anything changed with the city’s style? You’ll definitely hear more of it. And the culture is still very much the same. But there’s a new company, Texan Wire Wheels, that came out and started making [84s] again. For a while, you could only get them off of the cars from that year. And even then, the wheels were like 20 years old. We’d get ’em rebuilt and rechromed, but it still wasn’t the same. Now they got like 22-inch versions, and you can buy 22-inch Vogues too—so today you’ll actually see them on trucks.

Has that gone over well with old-school cats? Not with everyone. A lot of people in their 30s don’t really dig the big ones. They’re about the originals. And the younger generations are putting them on foreign cars like Lexus and BMWs, which the older dudes don’t usually approve of. I’m kinda in that mindset, but I can’t knock the younger guys. If I were 17 right now, I’d probably be doing the same thing.

Regardless, the wheels and pop-trunks seem like elements that, at least in Houston, will never die. Why is that? That’s courtesy of
Lil’ Keke and Fat Pat. They made it a style in the era of Screwed Up Click that became timeless. It’s something we take pride in, riding on 84s and banging Screw. The younger generation’s put their own twist on it, but it’s something that, if you grow up here, is always gonna be.