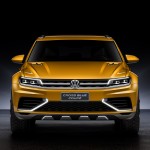 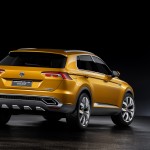 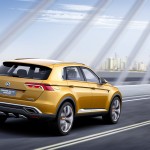 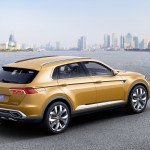 Volkswagen most recently introduced the CrossBlue Coupe Concept at last year’s Los Angeles Auto Show as part of the German automaker’s “Think Blue” campaign. The CrossBlue Coupe is designed for efficiency, sustainability and fun, packing a lot of technology and power into a midsize SUV.

Combination Platter
Based on the same architecture as the Vision GTI concept, the CrossBlue Coupe is definitely sporty. VW claims it will run from zero to 60 in 5.8 seconds, with a top speed of 147 mph, thanks to the 295-horsepower EA390-series V6 TSI engine and a six-speed DSG dual-clutch automatic transmission.

However, it is just as green (or blue, in VW talk) as it is fast. The SUV can run 13 miles on the electric powertrain at speeds up to 75 mph, while the hybrid gas engine boasts a maximum range of 570 miles per full tank.

The video game joystick life shifter adds an air of fun as the lever continuously returns to the middle, so the driver just has to flick it in a specific direction to switch gears. The Coupe also has several drive modes, including Sport, Eco, Off-Road, Charge and EV, which are activated by a button next to the shift lever.

The Foundation
The CrossBlue Coupe is built on VW’s new Modular Transverse Matrix (MQB) platform, which the company says will save them tons of cash due to the versatility of the platform. Thus far, that claim has not fully come to fruition, but if produced, consumers could theoretically see the CrossBlue Coupe with conventional four- and six-cylinder engines fueled by gasoline, diesel or CNG.

On top of that chassis is a wide (79.3 inches) and low (66.1 inches) body that resembles the GTI concept but has a look all its own. The integrated LED headlights fall right into the 3-D grille, and the aluminum trim and VW sign pop, giving it an aggressive profile. The flash factor is also bolstered by 22-inch aluminum-alloy shoes on 285/40 tires specifically made for the concept.

High-Tech Interior
Sitting in the CrossBlue Coupe induces an immediate reaction: Once the driver hops in and presses the touch start, the switches for the climate control and headlights instantly lift from rest, and ambient light is activated on a James Bond–type vibe.

Monitoring all the tech is easy to do via a huge 10.1-inch touchscreen with proximity sensors. Not only can the driver/passenger access the infotainment and entertainment functions, they can also check the hybrid system. And backseat passengers aren’t left out of the mix, either. They get integrated iPad minis in the head restraints, where they can also enjoy the audio, video and slapping Dynaudio stereo system.

Given that VW announced plans to release the full-size seven-passenger CrossBlue SUV on these shores for 2016, just a year removed from the initial announcement at NAIAS, there is a good chance the CrossBlue Coupe could see the light of day as well. Volkswagen USA president and CEO Jonathan Browning says his company wants to be the world’s leading carmaker by 2018. Releasing a production CrossBlue Coupe close to the aforementioned specs would be a step in the right direction.