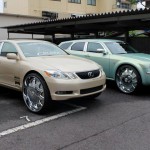 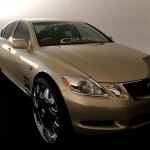 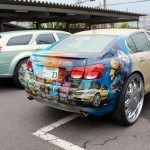 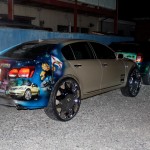 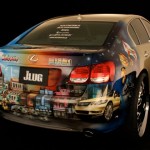 When we think of the big wheel movement, we think of a domestic Chevy with that stance we all know and love – ass-end sittin’ low with the front side a little higher up, big rims included. Well, that’s just our perspective. If you go to a foreign country, the domestics there are foreign to people in the U.S.A. When seeing things through the Japan lens, a domestic is, for example, a Lexus.

Scope out the Lexus GS430 in the video and pics above. This could very well be Japan’s version of a big wheeled whip. Not only is this an American inspired whip, but it’s also a mini tribute to the Miami scene from a couple years back. Remember when the Miami crowd introduced the style of having graphics on the rear side of cars? That trended around America, and now looks like it hit the streets of Japan. Is the big rim scene going global? Tell us what you think!