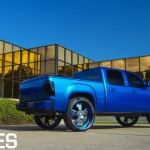 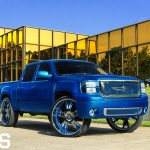 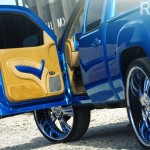 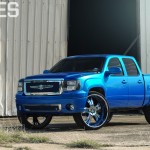 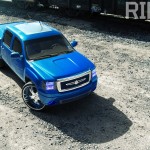 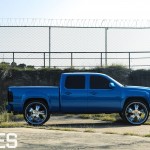 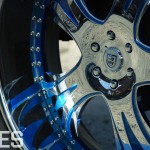 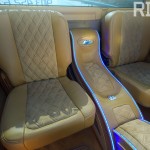 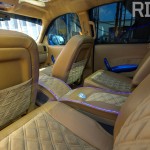 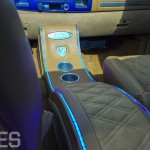 Joe Ferguson, the name of his business, One Stop Automotive, is not just for marketing purposes, and it certainly ain’t a lofty exaggeration—it’s a guarantee. It’s a declaration that when you drop off your vehicle for its transformation, it’ll never leave the premises to have outside work done; all work will be completed properly in-house. Joe prefers to keep a ride on deck that represents his shop’s capabilities, and since the second-generation Sierra hit the streets, he was convinced it’d be the perfect platform for flaunting his team’s techniques.

“I’ve had my eye on the GMC ever since the new body style dropped in 2007,” says Joe. “I’m a bargain shopper and wasn’t born with money, so I had to wait for them to get a little age on ’em before I could grab one!” After he copped the bone-stock crew cab, the build briskly began. “I had originally planned to do a little something, but that little something always turns into a big something with me,” he explains. “I drove it straight to the shop and we tore it down immediately.”

Once disassembled, a captivating color needed to be chosen, and although he’s dealt with candy paint on numerous occasions, Joe wanted to avoid the tedious process and the post-maintenance involved with candy. “My shop’s always been known for shooting candy paint, but after dealing with it on a daily basis, I grew out of it,” says Joe. “I couldn’t care less if I ever owned another candy whip!” Careening off the candy course, Joe ultimately found inspiration from the blue-oval side of the fence after a particular Ford F-150 hue caught his eye. He ultimately selected Ford’s Flame Blue Metallic for the strapping Sierra, and the outcome was a tidal wave of blue that turns heads on any boulevard. To round out the exterior, a chrome Tiarra custom grille was incorporated, in addition to a set of lavish Lexani 30-inch wheels wrapped in Pirelli tires.

The One Stop squad didn’t simply finish at the façade; to give it the true One Stop appeal, they remixed the guts into something rarely encountered. Inside, the sexy Sierra is like no other, with a butterscotch treatment reminiscent of Ford’s King Ranch edition trucks, yet flipped around with a One Stop custom touch. Arguably the most unique attributes in the interior are the rear bucket seats separated by a full-length custom center console, which you hardly ever see in a GMC truck. The final touch for the sea-color Sierra is a rare one: the full-glass panoramic roof, which also happens to be a staple of One Stop custom vehicles.

As the tantalizing truck towers over its Texas competitors, Joe is certain it accurately embodies not only his shop’s nameplate but his crew’s expertise, too. “I took my time with the truck,” he explains. “I built it the way I wanted it, and now I’m done with it. On to the next project!”