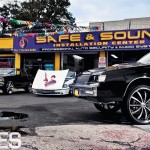 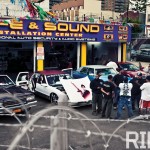 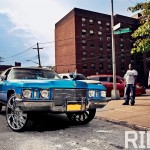 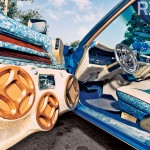 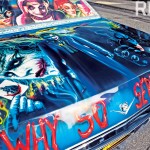 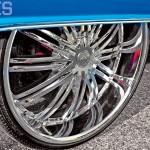 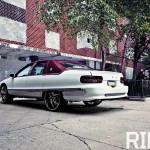 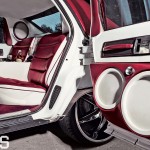 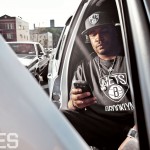 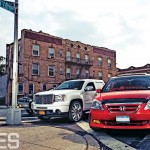 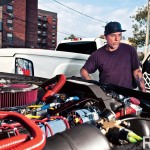 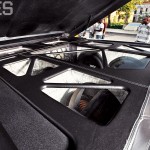 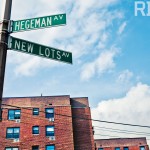 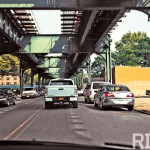 While Manhattan has grown into a metropolis of white-collar workers, rolling taxis and Town Cars, Brooklyn has remained a borough of the people. That hardworking family mentality is evident in no greater place than the Brooklyn car scene.

With only a few days’ notice, our boy Twin, who is currently building a ’72 Cutty, put out an APB across BK for cars. “Weekdays are hard, because guys who are at work can’t make it, and those who aren’t at work are asleep all day,” Twin says laughing. Despite the struggle, we had no fewer than 10 cars meeting up at Safe and Sound, an audio shop in the Crown Heights neighborhood of Brooklyn, to show us how they roll. The first thing you’d notice about the cars is that “this shit is built, not bought,” says Jazz (our guide for the day), “piece by piece by these fellas.” The result is a rawer vibe than you get down South or in Cali, but representative of the attitude the guys maintain as apparent when discussing the cleanliness of a location. “The garbage is ambiance,” Hoboe (owner of the ’83 Regal) adds. “We’re there regardless.” In BK, gritty can be good.

Rolling out from Safe and Sound, we follow the caravan through the neighborhood—navigating just as much by the trail of car alarms set off by all the bass as by the cars in front of us. Traveling through a school zone, we are slowed to a crawl, where, rather than complaints being yelled, onlookers ask if it’s a car show. Meanwhile, kids on the sidewalk dance along to the beat. “We like to see the guys in the neighborhood with the nice cars, the big rims and the music,” says Twin.

The next spot we roll up is the abandoned Prospect Place projects. “Brooklyn is known for the projects: Brownsville, East New York, Bed-Stuy, Fort Greene,” says Twin, adding that “people [there] are creative. They don’t have money, so they improvise.” Twin laughs as though he’s heard it all before when I immediately connect the PJs to Jay-Z and the famous Marcy projects, but he acknowledges rappers as one of many sources of inspiration. “We aren’t from the projects, but we go to the projects and hang out, because we want to see what’s going on there that we may be missing out on,” says Twin. The run-down PJs aren’t offering the guys any inspiration for their cars but plenty for jokes as they make cracks about how, seated atop the benches, it looks like it once did when it played home to thousands.

Cruisin’ down Mother Gaston, we get lost as we make a wrong turn, mistaking a car alarm for the ones we were following (yes, we really were keeping pace by the trail of car alarms). Meeting back up at Mother Gaston and New Lots, we turn a tiny island into a temporary car show with scores of people coming to peep the cars and make small talk. It was only once we left there that Jazz told us it’s a spot we wouldn’t have liked to be at alone, but that the car guys get respect in all hoods. “People like to see nice cars and hear music, so it intrigues a lot of people in the neighborhood, because they aren’t used to seeing that,” Twin elaborates.

As the sun drops lower in the sky—and as we find ourselves in need of a meal—the caravan of customs set up shop in the back parking lot of a Popeye’s to eat and knock out the remaining shots. “We usually just go in five dollars on a bucket,” says Jazz, laughing. “We can only eat so much—gotta go home to the wives.” From their car family during the day to their blood family at night, the players in the Brooklyn scene show that they roll deep in cars but even deeper in solidarity.