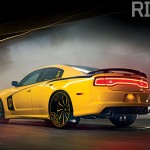 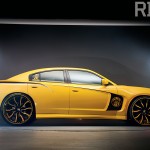 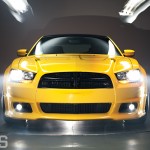 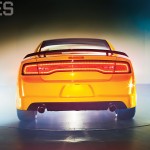 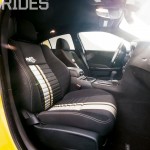 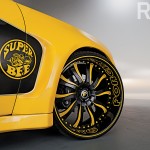 For the RIDES staff and you, the audience, automobiles are our works of art. They’re tirelessly improved, time-sapping, worked-on, yelled-at and drooled-over pieces of passion. The way you slowly roll down a boulevard allowing the paint to soak in the lights, or the relentless search for a spot where you can park hard—there’s tradition, loyalty and pride, and it’s encased in rollin’ sheet metal. There’s a reason you care more about your car’s appearance than your own (okay, maybe not so, but you get where I’m coming from). George Sanchez, owner of JW Motorsports of Bellflower, California, is in the process of building his own work of art with subtle yet particular traits being his motivation.

Keeping the distinctive rear lines of the LX platform Dodge Charger mixed with the current 2012 you see here, George chose to extend this Super Bee’s hips by four inches on both sides for an overall eight-inch widening. For the metal magic, Topo of TS Designs hand-laid the extra metal but kept within George’s theme, ending up with a stock-looking (to the untrained eye) Charger Super Bee. However, when approached from the front, the additional five inches of girth seem to overflow the fenders, menacingly grimacing from the chin to the hood in a powerful fashion. “The reason I didn’t want to go super crazy with it, six inches wide [on each side], is because I didn’t want to look like a 4×4 dually running down the street,” explains George. “The car is already attractive and has its own eye appeal.”

In order to pull the car together after the widebody prep, JC Customz repainted the Charger back to factory settings and, instead of “looking like a big banana,” as George puts it, he enlisted Alex at Monster Graphics, also in Bellflower, to add some flair. “The car went through a bunch of different sets of stripes until we got to where we’re at,” notes George. Continuing on the Super Bee theme, the subtle graphics package includes additional logos with a nod to the Forgiato wheels. It’s these simple yet effective hints that give way to a greater theme. George relates his style to what his customers want and see within JW Motorsports. “You want to be known for a certain thing [aesthetic and look] that you do so your customers have a template to look at. I did two widebodies already, but the Super Bee is the logical next step.” And with a Super Bee crowd that is very particular with their cars, this artful Dodge delivers the basics for a template that is buzzing with life but retains its class.

As for the large rolling gear, George says the characteristics of the Forgiatos were an obvious choice. “That style of wheel [Inferno] just goes so nice with that car; that wheel just screams out Super Bee,” says George. Originally on just 24s, he ultimately upgraded to 26s in the rear because, as a car builder, “it was impossible to keep stock-looking.”

With other modifications planned for the future, George isn’t quick to say what the Super Bee will get exactly, though he does say several offers were on the table to buy it before SEMA. What was once just supposed to be a stock daily driver turned into a flawless showpiece, and this Super Bee shows that with a slick widebody and attention to detail. You can plainly see what the buzz is about.