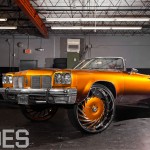 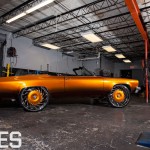 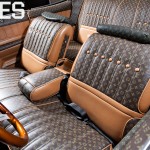 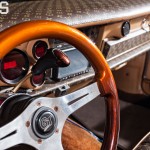 The art of building a classy old-school revolves around showing off: lots of money, hiccups and fun along the way, but you could have a respectable, show-worthy ride with the additional benefits of putting yourself in that happy place every time you step foot inside. Nothing exemplifies wealth and status like the French fashion brand Louis Vuitton, whose signature “LV” monogram has been plastered on everything from shoes to wallets to bags and, as you see here, even car interiors. One part luxury and one part showing off, this ’75 Oldsmobile Delta 88 has a touch of flash mixed with chic appeal.

After “Rock,” the owner of this gold-and-brown-fade ’75, decided he wanted a Delta to deviate from the rest of the Donk boys and their Chevys, he also chose to include the Louis V guts for a taste of that sweet life. “That material, I had from ’08, before the car was painted and rimmed up, and I haven’t had a scratch or nothing on it,” exclaims Rock. “The Louis [Vuitton] is like a luxury feeling—dare to be different.” He even came as far as New York City to cop the correct threads for his ride. Unfortunately, an overeager power-washer got the better of the ’vert top—matched with the interior—but Rock replaced it with a darker brown top, which substitutes nicely.

But the stars that catch his eyes are the 30-inch Asanti VF602s, a blend of futuristic design with classic undertones meant to stimulate passersby. “They sit on them 30s; the way it’s squatting on them—it’s beautiful,” Rock confesses. And he’s right. It doesn’t take a wheel expert or an old-school guy to understand the simplicity of big rims and bright paint. They go together like peanut butter and bacon. “That just tops it off,” he explains, “because you’re not sitting up high and looking all funny. I was thinking of going up to 32s, but I’m still convinced to stay in the 30s.”
After the LV had been splayed about the interior, the paint covered in a fresh coat of Pagan Gold Kandy and the Shants covering all four corners, Rock is happy with his ’75, saying his goal was to “make it look sweet and crush the Delta game.” And after seeing this 88 in person, we’d say it’s representing the Delta faithful correct.