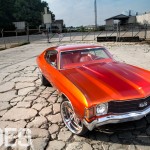 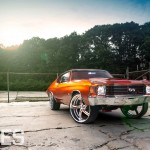 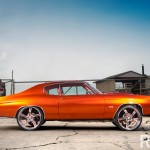 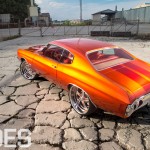 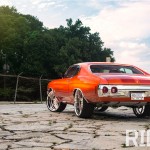 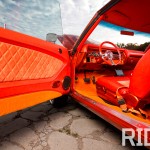 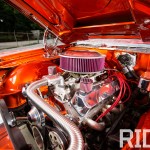 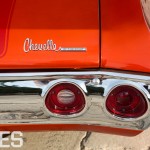 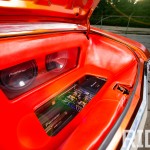 From Lowriders to hot rods, Donks to classics, candy paint is arguably the single most recognizable addition to any custom vehicle across all genres. And although candy may set your whip apart from the competition, it also has the potential of being your vehicle’s downfall if not properly applied. And regardless of whether you’re pro-candy or BC-CC (base coat, clear coat) for life, one thing is for certain: If candy is shining properly, it cannot be denied, which is clearly the case with this Chevelle SS from a small town in Georgia.

Owner of this 1972 Chevelle SS—and the shop that built it, Youngblood Kreations in Greensboro, Georgia—Dorsey Moon began his journey aspiring to demonstrate his painting prowess, win some trophies and ultimately make it into RIDES magazine. “I knew I had to go this far to set the new standard,” explains Dorsey. “I would be just like all the other Chevelles if I didn’t.” In the spirit of being diverse, Dorsey rolled the dice with a Kandy orange exterior with matching orange guts on 24-inch wheels, a combination that could easily be mishandled by the wrong builder. “A lot of these cars aren’t going candy,” says Dorsey. “They’re not willing to take risks.” Dorsey admits the Chevelle began as a typical street-muscle-spec Chevelle as he planned on a monotonous charcoal and silver paint scheme until coming across an unexpected deal. “I was going to go mostly original, but my buddy had some of the $1,300 Fesler door panels for a good price,” says Dorsey. “After I bought those, I just decided to keep going custom.” Once the creative ball started rolling, Dorsey stuck to his strengths for the ultimate direction while taking styling cues from afar. “I had been looking at this car overseas online for a couple years,” says Dorsey. “It’s a 1967 Camaro named ‘Sweet & Low,’ and it had the orange exterior and interior, and that was my inspiration.” Thankfully, Dorsey also happens to be one of the best candy painters in Georgia and the surrounding states, so the Chevy’s result was literally and figuratively in his hands.

The signature “YBK glow” is unrivaled, and Dorsey attributes that to his comprehensive painting process and use of quality materials. “People try to cut costs, and you just can’t do that to get it right,” explains Dorsey. “I start all the way from the bottom with the House of Kolor base, when a lot of people try to just use any type of base.” He continues, “Then I do at least four coats of Kandy, and I have a particular way I lay it down to make it pop like it does.” For the shoes, Dorsey stumbled upon another deal on a set of billet Bonspeed 24s, which he swiftly acquired. “I could have gotten some Forgiatos, but a billet wheel holds weight; not everybody has billet 24s,” says Dorsey. “It gives it that custom muscle-car look and goes well with the Kandy.”

Now that the shimmering Chevelle is sufficiently intact for Dorsey to show off, he’s more than pleased with the overall outcome and the accolades that have come with its completion. “I’ve always been a car enthusiast, and my dream was to get into RIDES magazine,” proclaims Dorsey. “I’m from a small town, and this is definitely a big deal.”