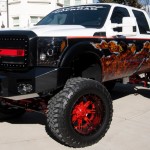 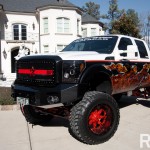 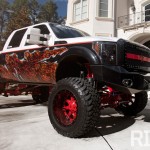 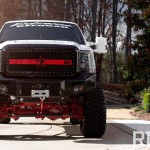 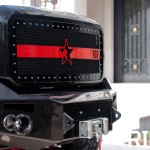 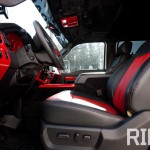 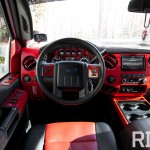 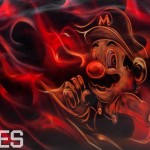 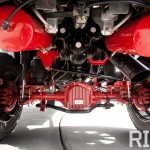 Mario Williams, one of the highest-paid defensive players in the NFL, has always been an avid car collector, owning well over 20 scattered at his houses around the nation. At his cribs, you’ll see names like Ferrari, Lamborghini, Bentley and many more. With whips like these, Williams clearly loves sports cars and coupes, but he also likes big trucks plenty. He’s a big guy, after all, so you can count on seeing bigger rigs like his Ford Raptor. But after being a professional athlete and making mega-bucks for seven years, Mario wanted to add another to his already massive collection. “I’m a big truck guy in general,” he says. “I’m a huge Ford fan. I wanted something beefy and aggressive.”

He knew the ideal truck would be something usable as a daily driver, but it would also have to be car show–worthy. After checking out his other options, he laid eyes on an all-white Ford F-250 Super Duty. Williams wanted to modify it in a way that would be timeless. “Teams change, numbers change. The NFL is a business. Typically, in college you got one team. And [North Carolina State University] was my team,” says Williams. This was the truck Mario would dedicate to his roots, to represent his college days.

Mario brought the F-250 to Austin O’Krinsky of Extreme Offroad & Performance in Katy, Texas, to explain his idea of transforming the whip into a sign of respect for the school that brought him the success he has today—which is a very noble action. “His career started in college, so he wanted something that would symbolize his time there and what he accomplished,” O’Krinsky remembers.

About six months and $100,000 later, the truck was complete. Its character is brought out by the custom, freehand-airbrushed paint scheme and colors for both interior and exterior. Each part of the truck is red, white or black, which are the North Carolina State University colors. The truck is two-tone black and white with red graphics on the sides. Look closely and you’ll see images of wolves reppin’ the NC State Wolfpack, with skulls that symbolize other teams the Pack tore apart with Mario’s help. You might also spot images of Super Mario, which has been Williams’ nickname since he was a college student. Hidden across the truck is the number nine (Mario’s number at NC State), which can be found on the shock clamps above the wheels and on the tailgate. The paint scheme alone was a two-week project that cost $7,500.

Inside, all the seats are wrapped in custom black or red leather with red Hyper Suede inserts and stitching, with custom-painted red-and-black dash and paneling to match. The headliner and pillars are covered in custom Hyper Suede as well.

One particularly interesting modification on the truck is the airbag system underneath it; the Kelderman Air Suspension System gives the truck a normal ride height of 10 inches, but with the AccuAir Control System, Mario can drop or raise it on command. This F-250 beast is capable of rising to 14 inches at its max and will drop to six inches when slammed all the way down.

Williams drives this whip often, but it’s definitely a show car as well, making an appearance at the 2012 SEMA show. Williams understands that he wouldn’t be where he is now if it wasn’t for his roots. NC State nourished his drive for success and helped him become what he wanted to be, and his Ford F-250 shows it.