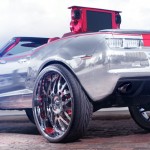 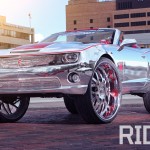 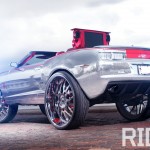 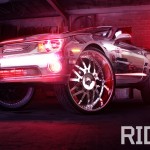 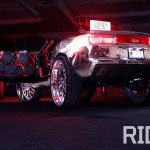 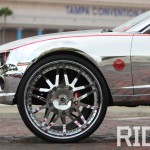 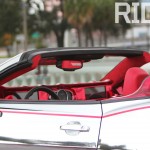 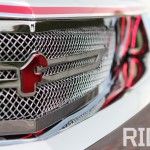 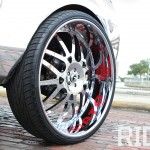 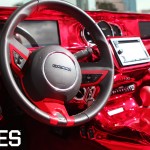 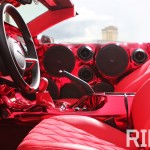 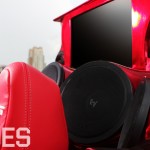 In 2005, pictures surfaced of a completely chrome Audi A8 from Dubai. Although not actual chrome, the body had been fully polished and cleared to create the shiny, mirrored effect. A couple years later, Unique Autosport painted 50 Cent’s Lamborghini Murciélago Roadster with Alsa Corp’s MirraChrome, which, although reflective (earning it a spot on the cover of RIDES Dec/Jan 2007 issue), fell short of mimicking the look achieved by actually chroming a piece of metal. It hasn’t been until the last couple of years that the chrome aesthetic has been properly replicated via expensive vinyl wraps—and although the trend primarily began with exotics overseas, it’s now made its way to street cars in the States.

Last November, at the Florida Classic in Orlando, Florida, an Outrageous yellow Camaro owned by Tampa whip-game boss “Thirst” debuted and was quickly dubbed the king of the 28-inch-and-up Camaros, thanks to its extensive motorized fiberglass and true V8 motor—a rare combo at the time that landed it in the March/April 2012 issue of RIDES. But as the Camaro game flourished, Thirst’s position weakened, so he headed over to 813 Customs in Tampa, Florida, for a total visual overhaul. “He said he was hearing good things about our shop,” says Joe Barravecchio, owner of 813 Customs. “And since he had so many shops work on it the first time, he just wanted to get it all done in one place.” Working with open minds and a hefty budget, Thirst and Joe came up with the car’s blueprint, and the 813 team got to work, as the only constraint was to debut at Forgiato Fest in Miami, which was just over a month away.

The most evident and expensive task was converting the surfaces to make them shine like chrome, inside and out. On the exterior, an expensive chrome vinyl wrap was applied, but even that wasn’t as simple as it sounds. “Before applying the vinyl, we had to prep the body, because the previous paint job left the need for some major body work,” explains Joe. “You have to get the surface underneath the vinyl perfect, because it shows all the imperfections.” After the body was proper, Joe ordered the special chrome material from the United Kingdom, as no one in the States had the premium vinyl in stock. To achieve the red chrome effect on the interior, 813 Customs went a different direction, as it would be virtually impossible to wrap the fiberglass properly. “We used the Cosmichrome spray chrome first and applied candy over it afterward,” Joe adds.

Garnering roughly a million views on WorldStarHipHop and YouTube combined, a Best in Show trophy at Forgiato Fest and the title of “King Camaro” from the streets, Thirst is at ease. But he knows the fame won’t last long. The King ’Maro is already back at 813 Customs for a third round of major upgrades, but you’ll have to attend the 2012 Florida Classic to see the results for yourself.