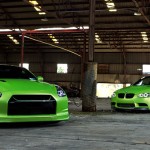 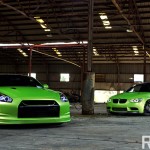 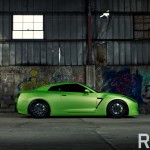 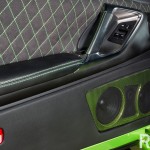 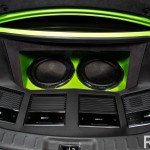 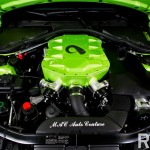 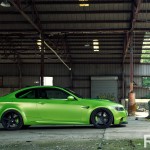 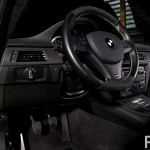 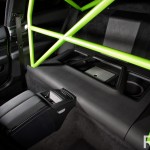 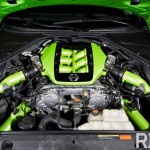 To play around a little with Michael Douglas’s famous line from Wall Street, green is good. Just look at a stack of cash, or the Incredible Hulk. Or Gil Rivera and Joe Lapadula, the owners of these two jade giants of the New York City–area exotic-whip scene. Normally, a BMW M3 and a Nissan GT-R don’t have much in common, but this duo is united by a shared shade of hyper-exotic green. The color is called “Verde Ithaca,” and you’ve probably seen it before—but not on a Bimmer or a Nissan. It’s a color traditionally slathered on Lamborghinis, but it’s just as effective at drawing stares when applied to cars that don’t wear the raging bull.

Giving the GT-R extra visual presence was exactly what Gil had in mind when he was looking to throw a new color on his super sports car. “I’ve been a fan of the GT-R for a long time. It performs against other cars so well, but I felt like Nissan did a horrible job with the colors in comparison to other exotics. I wanted to do something crazy with it.”

Enter Martino Auto Concepts—aka MAC—of Glen Cove, Long Island. Originally, Gil wanted to use a Lamborghini-spec blue on his ride, but when he heard that Nissan was planning to start offering blue as a GT-R factory color, he decided he wanted something more unique. Twenty years of repainting Lambos meant MAC had the paint code for Verde Ithaca, so he decided to throw it on—and one of the freshest whips in the tristate area was born. “Swagzilla,” as he calls the green GT-R, may look show-car fresh, but that doesn’t keep Gil from showin’ it off on the streets early and often. “It already has 20,000 miles on it,” he says.

As for the M3, known to friends and foes alike as “Mean Green,” it doesn’t see as much time on the open road, but that doesn’t make it any less of a monster. “The car right now, I think, has about 900 miles on it,” says Derek Pasch, president of MAC Auto Couture (the custom-build division of Martino Auto Concepts). A lot of those miles have been racked up on the show circuit, but at least a few of them were added by owner Joe—who also happens to be the head of MAC. Both Derek and Joe agree that the two hottest pieces of this Teutonic terror are the eye-popping green paint and the smoothly sculpted two-inch widebody. It’s no kit, either—MAC sculpted the all-steel quarter panels from scratch, faithfully following and exaggerating the lines of the stock body. “Most widebody kits look too cartoony,” Derek says.

“If you drive it anywhere, people are just flippin’ their heads—flippin’ out,” Joe says. And if this Bimmer’s style is the sort of thing you’re into, you might want to start saving; Martino may be putting this whip up for sale at the end of this year’s auto-show season. They ain’t talking price, but it’s fair to say you’ll need plenty of green to cop this green machine.