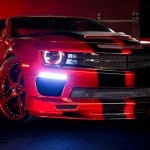 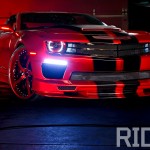 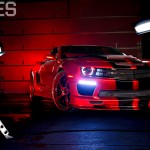 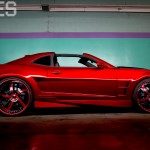 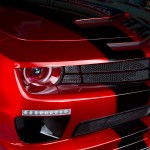 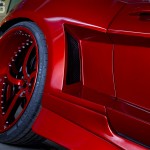 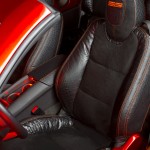 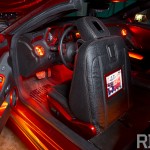 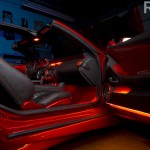 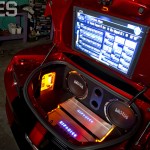 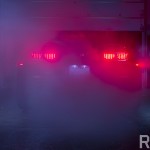 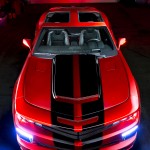 There’s something disheartening about a convertible muscle car with its top up—it’s like your favorite video vixen with a paper bag over her head. Even with the top down, some convertibles completely lose their muscular essence. In ’68 Chevy awarded those yearning for sunshine another option in the first-production T-top Corvette. The T-top ’Vettes were so popular that they outsold the convertible, leading them to be discontinued. The T-top’s popularity continued with the second-generation Camaros and Firebirds, ’80s G-bodies and ’90s F-bodies, but they have yet to see a reemergence in a production vehicle since.

When Ernesto Silva, owner of Players Choice Customizing in Milwaukee, Wisconsin, visited the 2010 SEMA show, he paid close attention to the trends and carefully devised a blueprint for his upcoming Camaro build. At SEMA he connected with all the right people in the industry who would eventually facilitate his intentions. Purchased in April 2011, Ernesto’s stock Camaro SS was shipped from Wisconsin to California, to one of the most important contacts he made at SEMA, Topo from TS Designs. After Topo worked his magic, the car was shipped to Drop Top Customs in High Springs, Florida—a shop that is known worldwide for its spectacular transformations—to take care of the T-top conversion. Once the well-traveled Camaro made its way back to Milwaukee, Ernesto and his crew at Players Choice Customizing finally had the opportunity to do what they do best: customize.

“I told my brother before we started, ‘There’s a lot of ’em out there, so we gotta go all the way,’” says Ernesto. “He was thinking it was going to look like the other custom Camaros out there, but I assured him we would do everything to make sure that didn’t happen.” In addition to the widebody and T-top conversion, Ernesto equipped the modified ’Maro with an RKSport ram-air hood, which they altered to tilt forward like a Corvette, and a Razzi body kit, to which they added a Corvette front lip and fabricated the rear to accommodate for the wider hips. With a hydro-dipping machine on deck, Players Choice also dipped every possible plastic piece in a red carbon-fiber print for that added detail that Ernesto and his crew pride themselves on.

For the wheels, he wanted to go big, but not gargantuan like some of the Camaro’s Southern cousins. Ernesto chose a healthy dose of stagger with a set of Forgiato Rasoios, sporting a modest 24-by-9-inch front and an insane 26-by-15-inch out back. The wheels are painted to match and wrapped in Pirelli tires.

Ernesto is proud of his T-top showpiece, especially because of the long hours he and his crew worked and, most importantly, he did it all on his own dime. “We had to take our time on this because we had no sponsors at all,” proclaims Ernesto. “It’s expensive, and a lot of people don’t go this far, but it was worth it to do it right.”