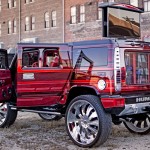 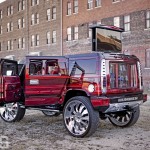 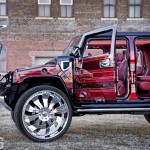 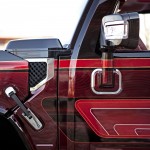 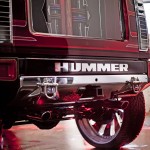 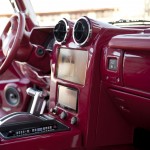 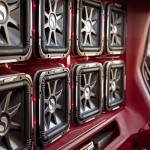 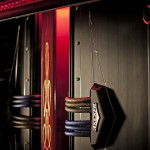 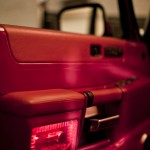 Hummer H2 customization has spiked considerably in the past couple of years, which has been clearly evident in the majority of RIDES’ 2011 issues. Perhaps the horrendous gas mileage has withered prices down to where people can justify the purchase, or maybe it’s just because you can pack a flea market’s worth of electronics inside. Either way, H2s are the new/old hotness—regardless of their federally unregulated gas mileage—and are not being put to pasture anytime soon.

SWIFT member Beto Gomez of Omaha, Nebraska, is no stranger to custom rides, having owned 40 (40!) custom cars in his lifetime. Currently, Beto’s stable consists of a melting pot of new, old and rare rides, but his trophy wife is his cranberry H2. Beto copped his “Tahoe in tank’s clothing” in 2005, slowly customizing as the years passed, and driving it sparingly over the summers. “I joined SWIFT, and since then I’ve been on the rise,” he explains. And if Beto needed any more motivation, he didn’t even have to look outside his city—there was another H2 on 32s within miles (featured in RIDES Dec/Jan 2011). “There was a blue one in Omaha that claimed to be the best,” says Beto. “So I set out to be better, and [I] let the people judge.”

The most obvious aesthetic element to Beto’s creation is the intricate paint scheme. Wanting to veer away from other outlandish graphic designs he’d seen, Beto insisted that the graphics flow with the Hummer’s horizontal bodylines instead of fighting against them. “Originally, I just wanted a nice, clean candy paint job,” he says. “My uncle, Tio Robert”—Roberto Conchas, who has since passed away—“introduced me to Danny D.’s work over the summer, and I was sold. I wanted to bring a little West Coast flavor to the Midwest.”

For the shoes, Beto yearned to be diverse but also to maintain relevance, so he turned to AC at Forgiato Wheels. “Forgiato is the hottest rim out right now, so I had to go with them,” he proclaims. “AC offered to custom make these and showed me love; this is the first set of 32-inch Infernos.” Behind the colossal chrome is a rare yet appeasing upgrade: a Wilwood big-brake system worthy of bringing the hefty Hummer to a halt. The kit consists of 16-inch rotors and six-piston calipers up front, with four-piston calipers in the rear.

And though Beto’s boo may look complete, he still has some pretty lofty goals—just in case another H2 owner decides to creep up on his title. “Next we’re going to start on the undercarriage,” says Beto. “We are going to chrome it, with engraving, and paint the rest to match the truck.” Even now, Beto is quite confident about his Hummer’s rank as is. “There is absolutely nothing close to it!” he exclaims. “This Hummer has it all, from looks to performance—the best of both worlds.”