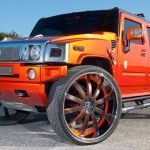 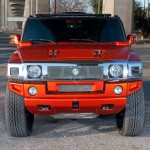 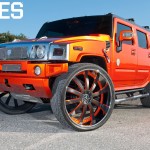 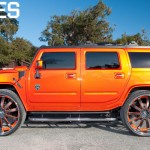 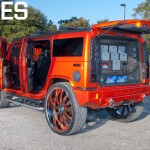 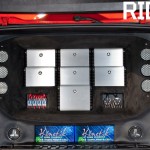 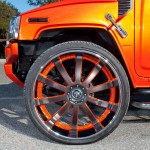 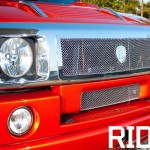 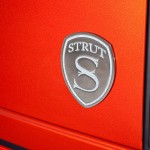 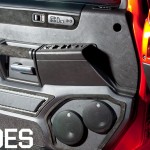 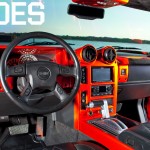 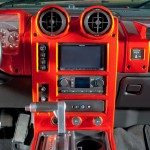 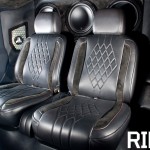 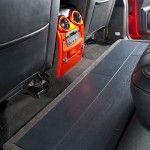 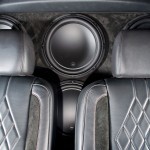 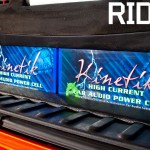 Being a professional football player clearly has its advan­tages, yet being of the mammoth proportions required to bru­talize opponents on a weekly basis not only takes its toll but can necessitate some ample accommodations. Six-foot-five, 270-pound Jacksonville Jaguars defensive end Derrick Harvey needs all the space he can get, and thankfully, he has the means to accommodate himself with a shop nearby that fits the bill.

Derrick dropped off his Hummer with shop manager Charles Brazil and head installer and salesman Matt Batten of Decibels Audio in Jacksonville, Florida, at the beginning of the 2010 NFL season, following their completion of his candy-blue Escalade. The plan was simple for the hefty Hummer: Create a personalized SUV that was not only custom but functional—being able to haul his football buddies wherever they want to go in style and comfort. “He told us, ‘Whatever you think is gonna make it hot, whatever is gonna get me in the magazine, I wanna do that,’” explains Matt. “So we laid out the plan, and he told us to go for it—he had no hesitation about what we brought to the table.”

On the color selection, Matt had a theme in mind to cater to Derrick’s alma mater. “He is a former Florida Gator, and his Escalade is candy Cobalt Blue,” he says. “So I told Derrick he might as well paint the Hummer candy orange, so everywhere he goes, you know he’s a Florida Gator.” Since paint is the only custom addition that Decibels does not provide in-house, they entrusted candy paint guru Glen Strickland of G&G Auto Salon to lay down the sweet tangerine lick. When it was time to choose the shoes, Derrick yearned for the most massive rolling gear wrapped in the thickest rubber the market could muster. “When we first got the Hummer, it was white and on 30s,” explains Matt, “and since Derrick did 30s on the Escalade, he wanted to step up to 32s on the Hummer. MHT said they would build us whatever we wanted, and this is the first set of DUB/MHT multipiece 32s in the entire world.”

Meeting Derrick’s interior requests were paramount, making it com­fortable but not too brazen, riding the fine line between custom and luxury. Decibels created a limo-like ambience, moving the captain’s chairs back, installing plush suede and leather throughout, and even installing black hardwood on the floor. “Derrick and his boys are all six-foot-six and 300-plus pounds, and they always travel in packs,” says Matt. “So if they want to ride together, they need to have plenty of room, and they want to do it in style and comfort.”

Though not complete just yet—they’re waiting on a supercharger kit and a 16-inch Wilwood brake system—Derrick and the Decibels team are pleased with the H2’s current state. “We’ve seen a couple others that are in the same league, but they’re something you’d only bring to a car show, not drive every day,” proclaims Matt. “He doesn’t park these things in the garage—he drives them!”