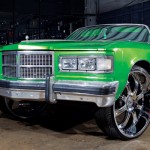 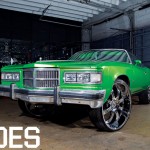 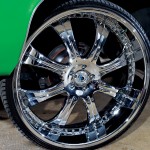 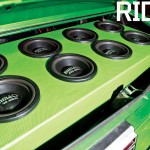 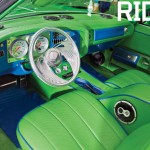 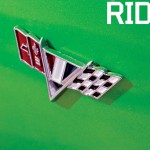 The Donk’s GM cousin, the Pontiac Grand Ville, was Pontiac’s flagship back in the early to mid 1970s. In the last but arguably most prominent year of its run, 1975, the pompous Pontiac came equipped with such uncommon accessories as power windows and even adjustable gas and brake pedals, standard. Needless to say, if you pushed a Grand Ville in those days, you were makin’ major moves. With fewer than 5,000 ’75 Grand Ville convertibles produced, it’s no wonder this grandiose Grand Ville is a rare bird on the streets, especially in custom attire.

The owner of this lime ’75, Antwan, set out not only to put together a respectable ’vert but to take the crown from all the local Chevys. “I just wanted to be different,” says Antwan. “And I’ve always liked the Pontiacs, so I had to do one.” And do one he did. Antwan completely changed the exterior to a sweet candy-apple-green lick, while still maintaining the factory trim and emblems. To complement the shell, Antwan had the guts precisely matched to the candy but kept the stock aesthetics of the interior, not altering the form of the seats or dash. He also added a fresh billet steering wheel to give it that hint of something special.

When it was time to mount up, Antwan knew exactly where to take his sled to get properly fitted: Coast 2 Coast Customs of Ft. Lauderdale, Florida. He chose a set of 28-inch Asanti AF131s and wrapped them in the skinniest Clear HP166 tires he could manage for a perfectly level ride. “He’s one of my most loyal customers,” says Jeremy, owner of C2C. “He has bought rims from us since 1999, and it’s always a pleasure dealing with him.” With a nod from the streets and now in print, it looks as if Cousin Grand Ville finally got its props.

One Response to “1975 Pontiac Grand Ville”