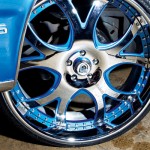 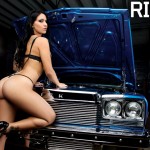 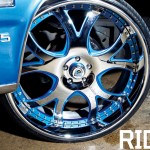 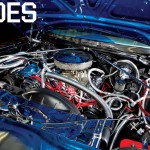 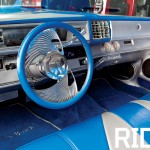 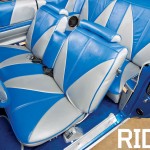 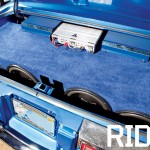 There’s something to be said for longevity in the big-rim game. Things happen: Cars get wrecked, motors blow up and wheels get bent, and you either have the gumption and grit to bear it or you tap out. Ft. Pierce, Florida, pioneer Maurice Davis copped his electric-blue LeSabre 19 years ago—19! Back when Snoop and Dre had the hoods and suburbs alike hooked on lowriders, Maurice was cruisin’ in a GM land yacht, years before it was popular.

Originally on 15-inch Trus and Vogues, the ’vert has seen its fair share of transformations. Multiple paint codes, themes and wheels adorned the ride throughout its near two decades of reign over Ft. Pierce’s streets. Another obvious attraction of the lofty LeSabre is that it’s not a Chevy in a game littered with them. “Everybody has Chevys; if everybody in the hood has some Air Force Ones, you gotta go get some Jordans,” proclaims Maurice. “Anybody who knows cars knows that Buicks cost. For every $2 I spent on the Buick, I could’ve spent one on a Chevy,” he continues. “They’re like dinosaurs—they’re extinct.”

Aside from its exclusivity, Maurice’s ride is as detailed as they come, down to the original molding and the factory motor. “I had to track down the painter who painted it the first time, in ’93, to get my factory moldings back,” says Maurice. “I’m big on details, and I needed it to be like factory.”

Sticking with his die-hard Buick montage, Maurice opted to pass on the beastly BBC in his garage in favor of the Buick 455 powerplant that originated under the hood. “I actually have a 638 Chevy block lying around, and everybody tries to get me to put that motor in,” says Maurice. “But that defeats the purpose. I got a Buick, and I’m not about to stick a Chevy motor in my car; I don’t want to crossbreed it. I figured if I went to car shows and popped my hood, I’d get more respect if it had the Buick motor in there, instead of going the cheap route with a Chevy motor.”

Wanna see more of Dominique, our model? Check her out here.