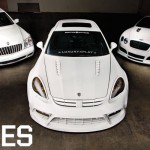 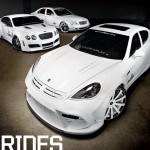 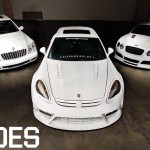 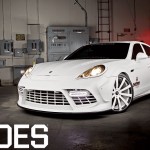 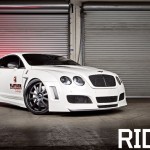 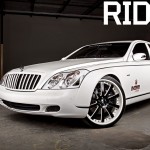 Asisde from the initial cost—which can ultimately be finagled via lease payments and creative financing—it doesn’t take much to put a luxury car in the game. A set of staggered 22s on an S550 and you’re already on par with an NBA baller, but that’s far from custom. It takes deep pockets and, more important, some platinum cojones to rip apart a six-figure ride and essentially start from scratch. Entrepreneur and whip-game mogul “BC” is one of those rare individuals who have the means, drive and sickness to splurge.

Dubbing anyone a mogul is an action not to be taken lightly, but the adjective is quite applicable. Owner of the L4P (luxury4play.com) community website, Gold Rush Rally and Exotics Boutique, BC clearly deserves the title. L4P, which is now a more than 20,000-member-strong group, is the online “luxury lifestyle community” for those who enjoy the finer things in life. The Gold Rush Rally (goldrushrally.com) was created as an extension of L4P. “It started as a rally for the members and our friends to just meet and have a blast,” explains BC. “I tell people, as opposed to other rallies, Gold Rush is about the participant first, not the other way around.” Exotics Boutique is BC’s third major automotive enterprise, focusing on brokering and customizing cars. “I would always be approached by people who have seen my cars, asking if I could find them parts or help customize their cars, so it only made sense,” proclaims BC.

Connected to a vast global network of body shops, BC decided to have his high-end autos shipped cross-country to Platinum Motorsport and Collision in Los Angeles. “We both push the envelope in everything we do,” he says. “We want the product to be one of a kind, so I decided to let them take a shot at the Maybach.” The Platinum squad diligently disassembled the 57 in preparation for its trendsetting overhaul. “I wanted to go with the factory white at first,” explains BC. “But Jack Keshishyan [from Platinum] talked me into the matte, and I’m glad I did it!” Not pausing on the paint, the crew custom coated the grille and taillights black and cracked open the über-expensive headlights to match the body—six grand a pop, if anyone’s counting.

Once the exterior was up to BC’s demanding prerequisites, every piece of the factory wood grain was removed and enameled in gloss black to match the exterior’s trim. To finalize the aesthetics, BC selected a set of ebony-and-ivory 24-inch Forgiato Concavo three-piece wheels. As to why he chose the brand with the “F” on the cap, BC reveals, “I had some [different wheels] on my Flying Spur and had a lot of problems. So a friend put me in touch with Gary and AC from Forgiato, and I was so impressed with their quality and service that I’ve put them on all my cars since.” As if the outward enhancements weren’t enough, BC enlisted Renntech to pad the pony count by incorporating their exhaust and upgrading the ECU, intercooler and transmission. Renntech also modified the suspension, lowering the milky Maybach to properly hover over the rolling gear.

Check out more images and the full specs of BC’s Maybach 57 here.

While the Maybach was making its debut at the 2010 SEMA show, BC had to endure painstaking seat time in his brand-new but stock 2011 Panamera Turbo. With one of the first 2011 Turbos to hit the States, BC promptly surrendered the keys to Platinum for a treatment similar to that of its German counterpart. “I’ve worked with a lot of different body shops across the country, but Platinum’s matte paint looks better than anyone’s—I can guarantee you that,” he explains. And one thing BC also makes crystal clear is that none of his cars are wrapped in vinyl. “This is not a wrap,” he declares. “I hate wraps!” Selecting a carbon-fiber Mansory kit for his tantalizing Turbo, the team at Platinum took the customization to the next level, removing all body parts, moldings and even the windows in preparation for paint. Once the exterior was worthy, BC looked to Forgiato yet again for a set of their Monoleggera Concavos, this time in 22 inches and painted mostly white with a subtle hint of noir. In true BC fashion, he enlisted BBI Autosport to install their 850hp power pack, making sure the pompous Porsche could back up its bolstering bravado with gobs of horsepower.

The third flat yet flamboyant white exotic from this trio is completely cosigned by BC but comes from the Platinum camp exclusively. “That thing is sick,” says BC. “They did a great job on their Bentley, too.” This second wide-body Bentley GT from Platinum incorporated the Veilside Premier4509 wide-body kit, and it’s breathtaking, to say the least. The crew at Platinum Collision tore down the GT, as they did with BC’s fleet, removing everything to affix properly the fresh paneling. Built for SEMA 2010 and the Los Angeles Auto show—and, quite frankly, to boast their mechanical prowess—the Bentley proves Platinum has set the bar for custom wide-body Bentleys in the game, leaving the competition scratching their heads.

Check out more images and the full specs of the widebody Bentley Continental GT here.

Platinum’s diligence and drive, coupled with BC’s insight and direction, has helped create masterpieces, and they’re resting comfortably atop their respective thrones. Although others may attempt, their efforts will likely pale in comparison to this handsome trinity.