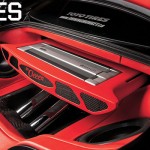 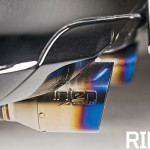 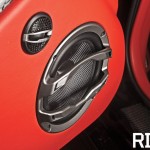 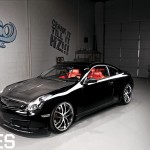 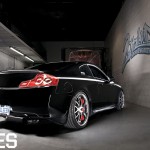 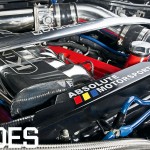 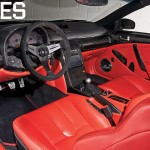 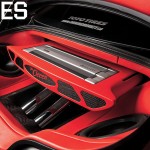 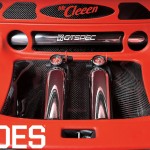 Richard Polsoni likes his cars the way he likes his scalp: clean. A glance at his ride confirms it—the license plate reads MRCLEEEN, an homage to the nickname he gained on account of his neatly shaven lid. Likewise, his Infiniti G35’s sleek lines inside and out live up to the name just as well as the car’s owner does.

“I bought the car with no intention to modify it,” Richard says. “That pretty much lasted only a month.” As a gearhead who grew up on a steady diet of his dad’s car magazines, Richard has been entering and competing in events since he scored his license. But he didn’t want just anyone working on his car—he wanted someone he knew. He turned to an old and trusted acquaintance, Frankie Valenti of 20HZ Audio.

Richard wanted to start with some audio mods, and Frankie had an idea he wanted to try: a motorized amplifier rack for the trunk. “I like doing a lot of motorized tricks,” Frankie says. Other changes were made to boost the car’s acoustic abilities, including a pair of 10-inch Hertz subwoofers to keep the motorized LRx 5.1 amps company in the tail, while new Hertz HSK 165XL speakers in front required custom molding of the interior door panels.

From there, the duo decided to install carbon-fiber trim in the trunk, which led them to wrap the interior trim in carbon fiber as well. Frankie went all out on the Infiniti’s cabin, making the most of his company’s ability to perform the carbon-fiber wrapping in-house. Even tiny details, like the power window switches and the bottom of the glove box, found themselves coated. “Pretty much all the interior panels that are carbon fiber are the original panels,” says Frankie. “They’ve just been wrapped in carbon fiber, with multiple layers of resin and clear coat.” When all was said and done, the 20HZ crew had used about five square yards of carbon fiber throughout.

With the carbon fiber and red leather reupholstered courtesy of 20HZ and Seam Line Interiors, Richard admits the interior is by far his favorite part of the car. “It feels like something you’d find in a Bentley or an Aston Martin,” he says. And while he’s ready to let his refreshed ride stand on its own for a while, he’s already thinking of what the future may hold, which could turn into a full turbo setup and some exterior changes next year. “It’ll never be done,” he says. Maybe not, but whatever the future holds for this ride, odds are it’ll remain super-cleeen.