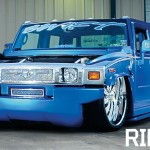 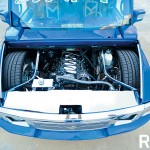 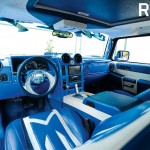 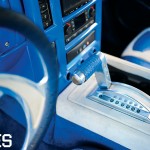 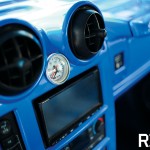 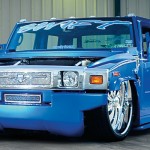 Show-worthy truck owners typically have one of two elevations they’d like to set their cruising altitude at: sky scraping or pavement pounding. It’s only when the choice is made to go against the grain, taking a rig totally dedicated to one realm and flipping the script, that it raises eyebrows. Eder, coleader of the SWIFT Texas chapter and owner of the capacious cobalt SUT, had visions of raising such eyebrows, and the results were nothing short of groundbreaking.

Copping the SUT roughly two years ago in dealership spec, Eder had modest ambitions for the Hummer’s future direction. “I started out with just some audio and 26s, and from there it never stopped,” he recalls. “Honestly, it’s like a sickness now.” The most meaningful element of the build for Eder was to be able to lay frame on the biggest wheels possible. To carry out such a feat, the Hummer would have to be drastically modified. The first item of business was to convert the four-wheel-drive system to two-wheel only. This meant eliminating the transfer case, among other driveline components. Once apt to get low, the crew at Medicated Metal Works installed an air-ride suspension setup in addition to all the necessary rearranging to accommodate for the massive wheels that would eventually hide under the ride. His friend and club member Paco also spent some serious man-hours outfitting the rear end to make room for the massive rolling gear.

To get his hue in line with his crew, Eder appointed Chris Gilbert at Ekstensive Metalworks for the paint. Chris laid down a sweet House of Kolor two-tone candy, and B2D Customs took care of the body mods, such as handcrafting the front and rear bumpers. Originally opting for 28-inch Intros, Eder felt the diameter was still a bit inadequate for achieving his goals. When deciding to upgrade, he went back with Intro. “I didn’t want just regular wheels; that’s why we worked it out with Intro,” explains Eder. “I wanted custom-made wheels with my own design.” He continues, “Nobody was doing 30-inch billets, and Intro came through, and now I have the first set of billet 30s ever made.” With that first comes another: the first Hummer to lay frame on 30s. Need further proof? Check the club’s YouTube vids of Eder sparking it up on the Las Vegas strip.

In rare but SWIFT TX form, Eder also touched on an area unbeknownst to most Hummer owners: performance. Totally accepting that the SUT will never see a drag strip, he envisioned the performance mods setting him over the top when pulling into shows or events. Eder let Paco work his magic yet again, upgrading the cam and intake, and even polishing the heads. “I like what Paco did with the motor,” says Eder. “Whenever we roll into a show, people look at it like they’ve never heard a Hummer with an upgraded cam—it adds to the overall appeal, I think.”

Even though the SWIFT lieutenant insists the SUT is incomplete, he is content with its standing amongst the elite custom Hummers. “I think it’s one of the sickest Hummers in the world,” Eder exclaims. “But I couldn’t have done it without the help of my friends and family.