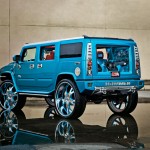 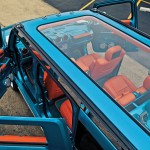 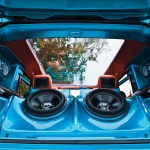 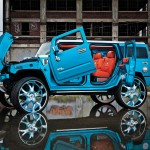 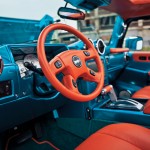 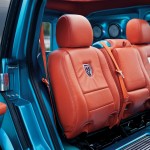 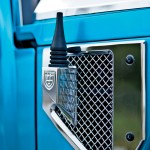 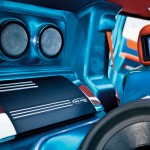 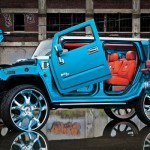 When Hummer first unveiled the H2 in early 2001 (as a 2002 model), their objective was clear: dominate the road by trampling any small vehicles in the way—and look badass while doing so. All right, so maybe that wasn’t GM’s exact wording on the corporate PowerPoint. Nevertheless, the H2 was the baddest rig on the road at the time, and everyone knew it.

For the next few years, every rapper, athlete and even soccer mom craved the mammoth monstrosity of excessiveness. Essentially a tank on a Tahoe chassis, the H2 wasn’t exactly military spec but definitely had the presence and the sales figures to prove it, selling 34,529 units in 2002. Since then, the behemoth’s popularity has dwindled considerably, with 2009 sales figures amounting to a dismal 1,513. It’s no secret that the downfall was predominantly due to its ridiculously low gas mileage—so low, in fact, that GM does not have to report the figures, due to a nearly five-ton curb weight.

But even amid all the negativity, we must pay homage to the H2 for what it has done for the big-rim scene. With its ginormous wheel wells and ample interior space, aftermarket companies and customizers alike have been tapping the truck to display the largest wheels possible, while shoehorning in a boatload of electronics for the better part of a decade now.

It’s for this reason shops like Midwest Customs of Omaha, Nebraska, still have the cojones to flaunt their prowess with the H2 as their palette. “People stopped customizing them because of the gas mileage,” says MWC shop owner Jake King. “But it’s a big box with lots of room that you can put the biggest wheels possible on; so it’s perfect.”

Originally having constructed a black H2 with mild customization, MWC made the decision to shut down the Hummer game once and for all, almost as an ode to the hefty hauler, with the stark possibility of theirs being the last major customized version for a very long time. Sticking with their signature see-through motif applied to many of their truck and SUV builds, the fellas decided to take it one step further. They conjured a plan to make the H2 topless without sacrificing form or function: replacing the roof with a precisely cut sheet of multilayered Lexan.

“It’s a custom-cut piece of Lexan; it’s actually two pieces put together,” explains Jake. “This roof is just about bulletproof—you couldn’t break the glass with a hammer.” With the new roof totaling $4,000 alone, the crew at MWC was über-cautious in its installation. “It took a lot of engineering, but it turned out pretty good,” proclaims Jake.

The rolling gear, of course, is nothing short of immense, with MWC mounting a set of the largest DOT-approved wheel-and-tire combination currently available for purchase. Opting for 32-inch Asanti 143 wheels wrapped in Yokohama 325/30/32 tires, the boys then matched an Asanti grille package on the outside to complement them.

With a build this extravagant, there’s much doubt that this H2 will ever see anything close to a competitor—and that’s just fine with the shop that put Nebraska on the map.

As seen in the December/January 2011 issue of RIDES Magazine!